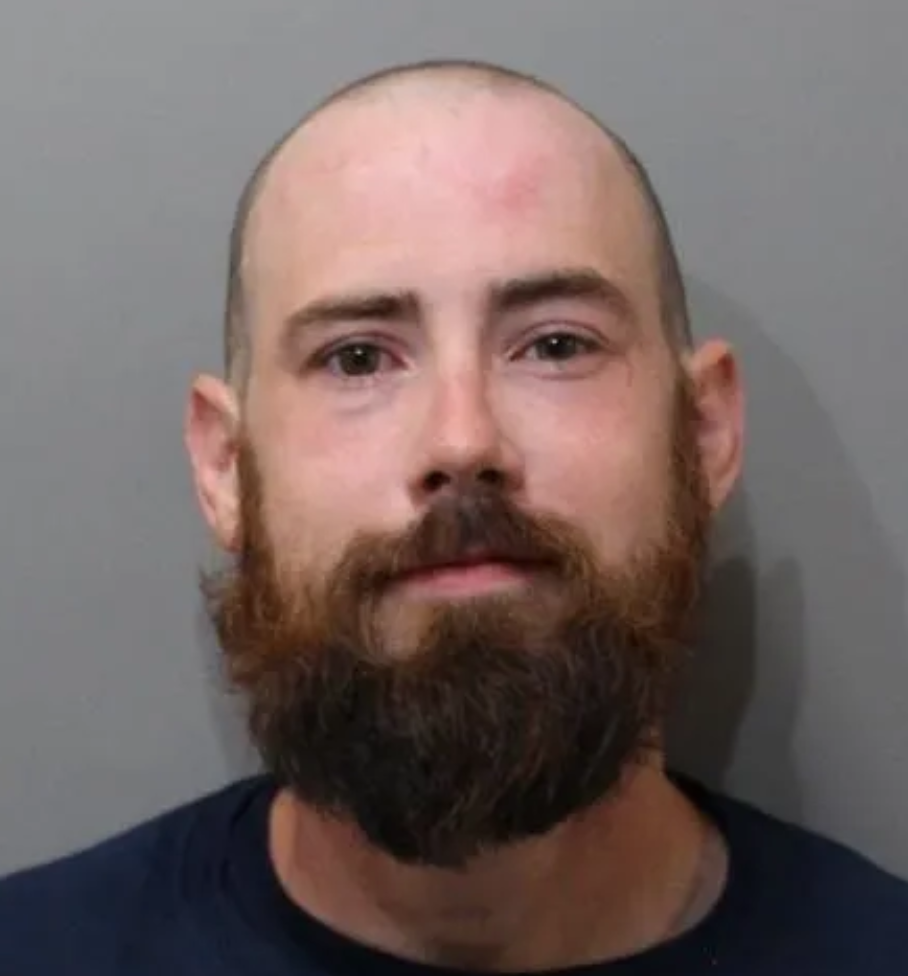 Steven Derrick Tucker, 30, was arrested on June 11th in Coeur d’Alene, Idaho with fellow members of the fascist group, Patriot Front, as they attempted to crash a Pride event there. Court records in Dallas County, Texas show that at the time of his arrest in Idaho, Tucker was out on bail awaiting trial on a charge of 2nd Degree felony assault with a deadly weapon. This charge stems from his arrest on August 14, 2021 after a fight he had with his male roommates at a house in Mesquite, TX. He threatened to kill one of them with a knife after they argued about washing dishes, prompting the other roommate to intervene. Court records in the aggravated assault case further reveal that one of the roommates (the complainant in the case) had a dating relationship with Tucker and that Tucker “was a member of the complainant’s family and household.” He was released on $25,000 bond on August 22, 2021.

Patriot Front members choose pseudonyms when they join the fascist group. Steven Derrick Tucker chose “Don TX” and used this pseudonym in Patriot Front’s private chat server. This chat server was subsequently leaked to the media group, Unicorn Riot, and the contents were published in January 2022. Posting as “Don TX” in the Patriot Front chats, he made reference to his legal situation, notably the fact that he wanted to keep Patriot Front out of it. (Is it any wonder?)

In a flurry of legal activity after Tucker’s arrest in Idaho as a member of Patriot Front, his bond was revoked for several weeks until he was eventually released with additional bond conditions including a requirement that he wear a ankle monitor. Tucker has also retained the legal services of Jason Lee Van Dyke, a longtime white nationalist and former lawyer for the Proud Boys, as his legal counsel in the Texas case.

Steven Derrick Tucker has traveled with Patriot Front to participate in their fascist flash mob actions on several occasions. In February 2021, Tucker was involved in a deadly car crash with several other Patriot Front members at the end of one of these actions in Utah. One member from New Jersey was killed and Thomas Rousseau, Patriot Front’s leader, was injured and hospitalized.

Read more at Antifa Garfield and The Daily Beast

We can now confirm that Patriot Front member, Jared Michael Boyce (27), goes by “Logan UT” in the Patriot Front chats leaked by Unicorn Riot. In addition to that pseudonym, we know that Jared also uses “Brohumrie Matey” (or a similar variation) on Telegram, where he posts “anonymous” pictures of himself as well as a wide variety of Nazi propaganda. We matched these pseudonyms together because Jared posted the same photo of himself in the Patriot Front chats and on his Telegram. The picture shows him standing on stolen Pride/Mexico flags as a gesture of disrespect.

Jared was arrested on June 11th with 30 other members of Patriot Front in Couer d’Alene, Idaho, as they were on their way to intimidate a local Pride event. After his high profile arrest, Jared’s mother spoke with The Daily Beast to say that she kicked Jared out of her home in the hopes that her son will finally cut ties with the extremist faction. (He did not.) 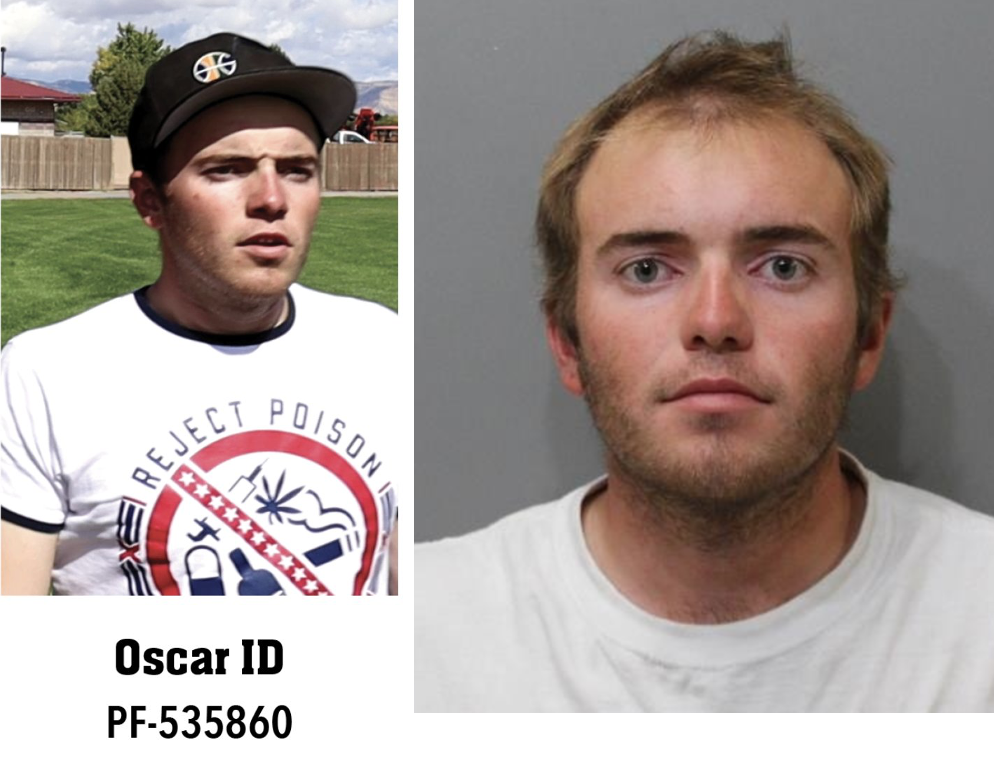 We have identified Dillon Thomas Oakes (25) of Highlands Ranch, Colorado as a member of the neo-Nazi organization Patriot Front. He uses the alias “John – CO” within the racist organization. Dillon Oakes has hosted at least one Patriot Front gathering at this parents’ home and has engaged in regular Patriot Front organizing, including vandalizing a mural in Denver, CO with racist graffiti.

According to Dillon’s leaked chat messages, he was radicalized by the right-wing  message board 4Chan, particularly its /pol/ board, which is also responsible for creating the QAnon conspiracy theory and numerous mass shooters. Dillon indicates that he is the author of a thread posted to /pol/ where he describes getting in trouble with his family for singing the “Ni***er Song,” and posts a recording of the song. 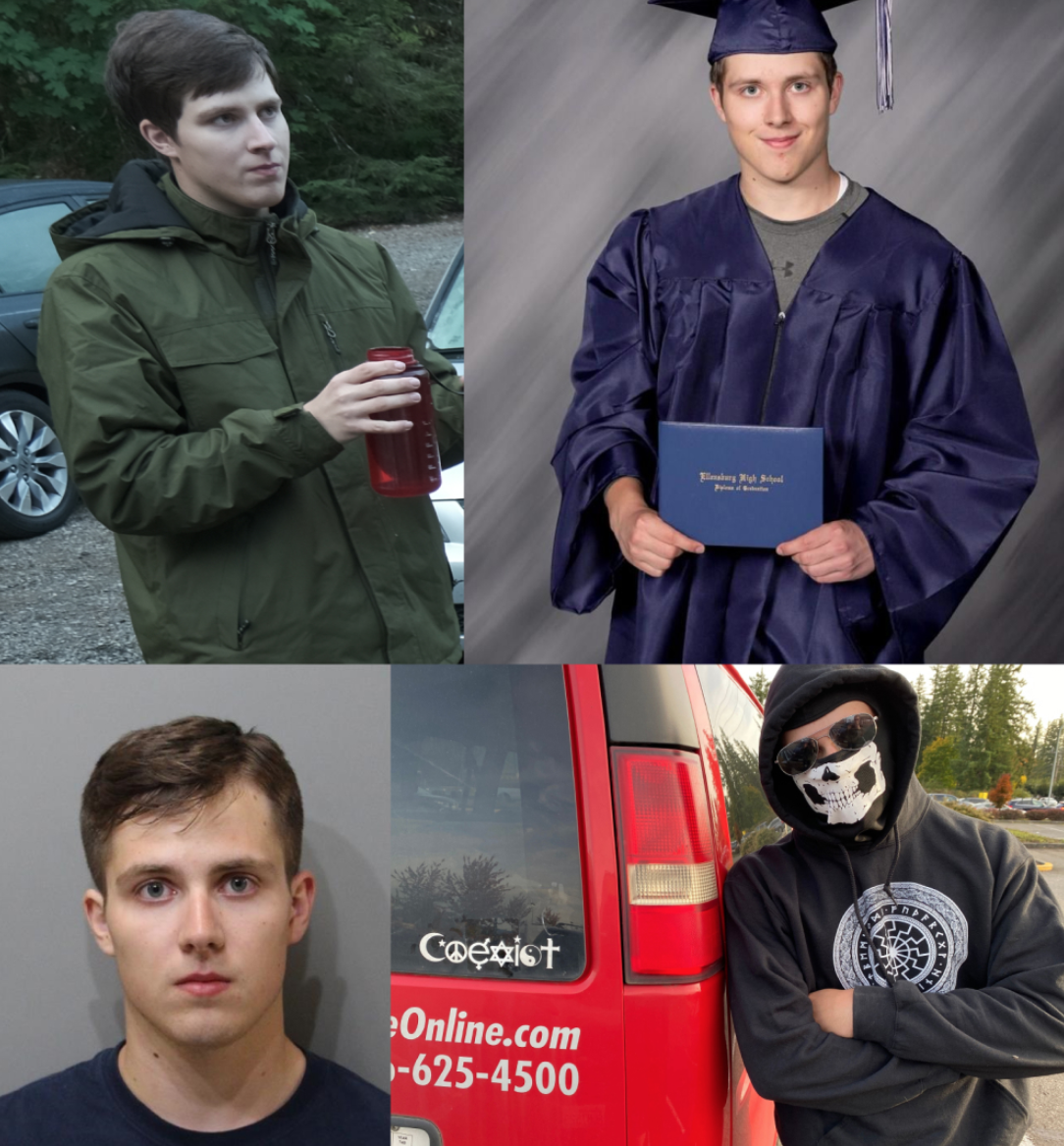 Spencer Thomas Simpson is a member of the neo-Nazi, neo-fascist, white-supremacist group Patriot Front (PF). He operates under the name “David WA” and lives in Ellensburg, WA.

Simpson is highly active and has attended several Patriot Front banner drops, stencilings, hikes, and more. He helped deface the “Respect and Love Olympia” mural in October 2021, and was also present at the recent December 4th fascist march in Washington, DC. Spencer was arrested on June 11th, 2022, during an attempted Patriot Front flash mob intending to intimidate and disrupt a Pride event in Coeur d’Alene, Idaho. 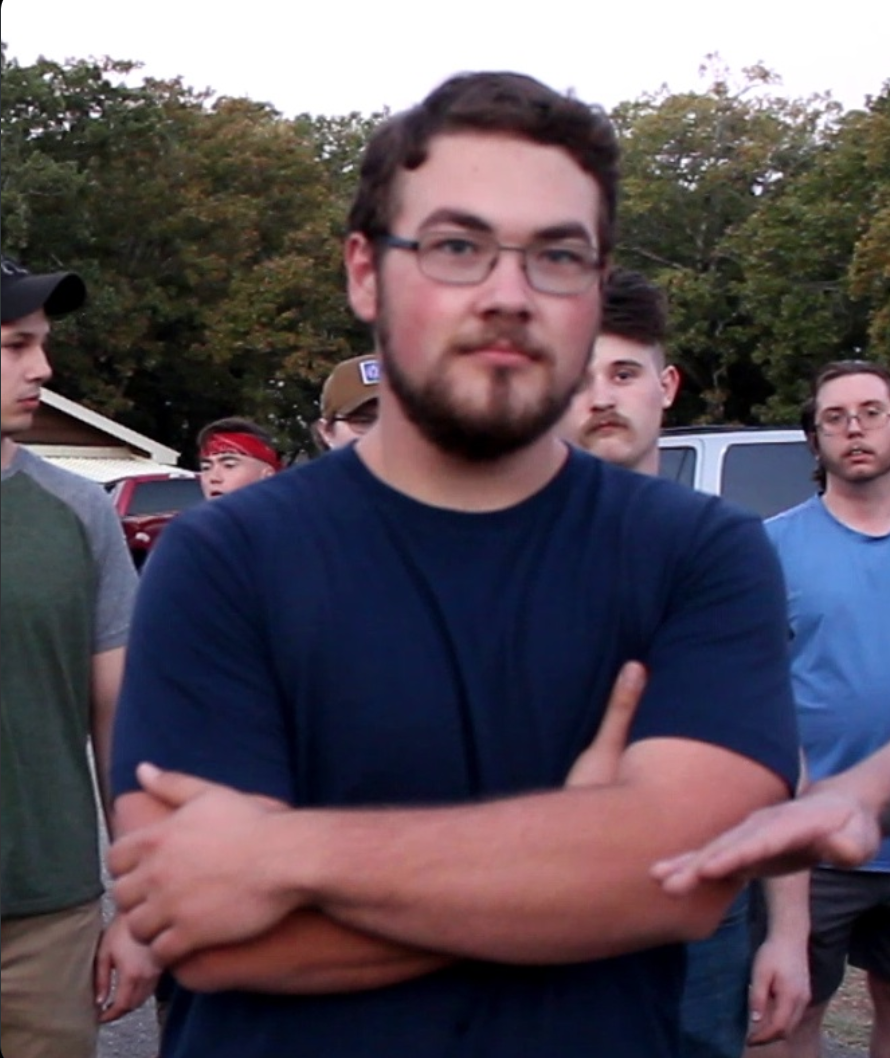 We can confirm that Devin Wayne Center of Fayetteville, Arkansas is “Nathan AR” of Patriot Front. Center was arrested yesterday in Idaho along with 30 other members of the organization. The above photo shows Center (“Nathan AR”) at a regional Patriot Front training event last year.

We can now reveal the identity of Patriot Front’s Network Director for “Network VI” (northern Alabama & Georgia, southern Tennessee). Wesley Evan Van Horn of Lexington, Alabama is “Christopher AL” of Patriot Front. He was arrested with 30 other Patriot Front members in Idaho on Saturday, June 11th, 2022. 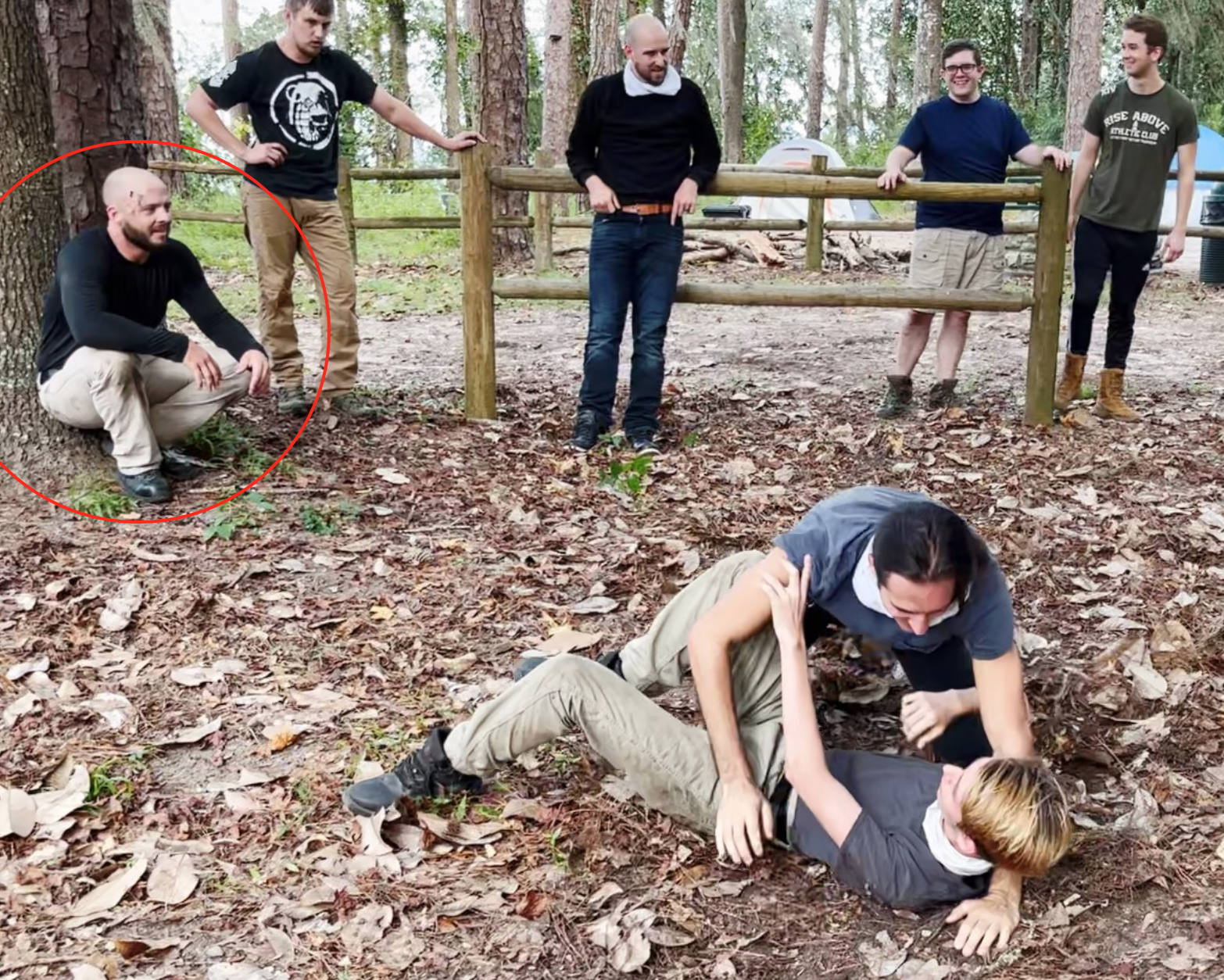 In January 2022, internal Patriot Front messages were leaked online by the Unicorn Riot media collective. In those messages, Network Director “Christopher AL” (Wesley Van Horn) provided the locations of every member of his Patriot Front network at the time. He also indicated that he lived in or near Lexington, AL.