Nicholas Wolfgang Kaufman, aka “Mark PA” in the leaked Patriot Front Rocket chat logs, is by all accounts a newer member of the group, having gained access to the fascist group’s chat in November 2021. From what we know about Nicholas he was a former Division 3 football player at Kings College in Maryland, having played the linebacker position and recorded a measly season high of 2 tackles.

Kaufman works as a surgical assistant for the Lehigh Valley Health Network at their Muhlenberg Location. Kaufman has put up Patriot Front stickers in the area around LHVN’s offices in Allentown, PA, including the Citgo on West Street and the Butz Corporate Center on Hamilton Street.

Kaufman’s place of business (Lehigh Valley Health Network) can be reached at 610-402-8000. We encourage people to politely call and demand that LHVN fire Kaufman, who started working their in November, for practices that clearly contradict their standards. 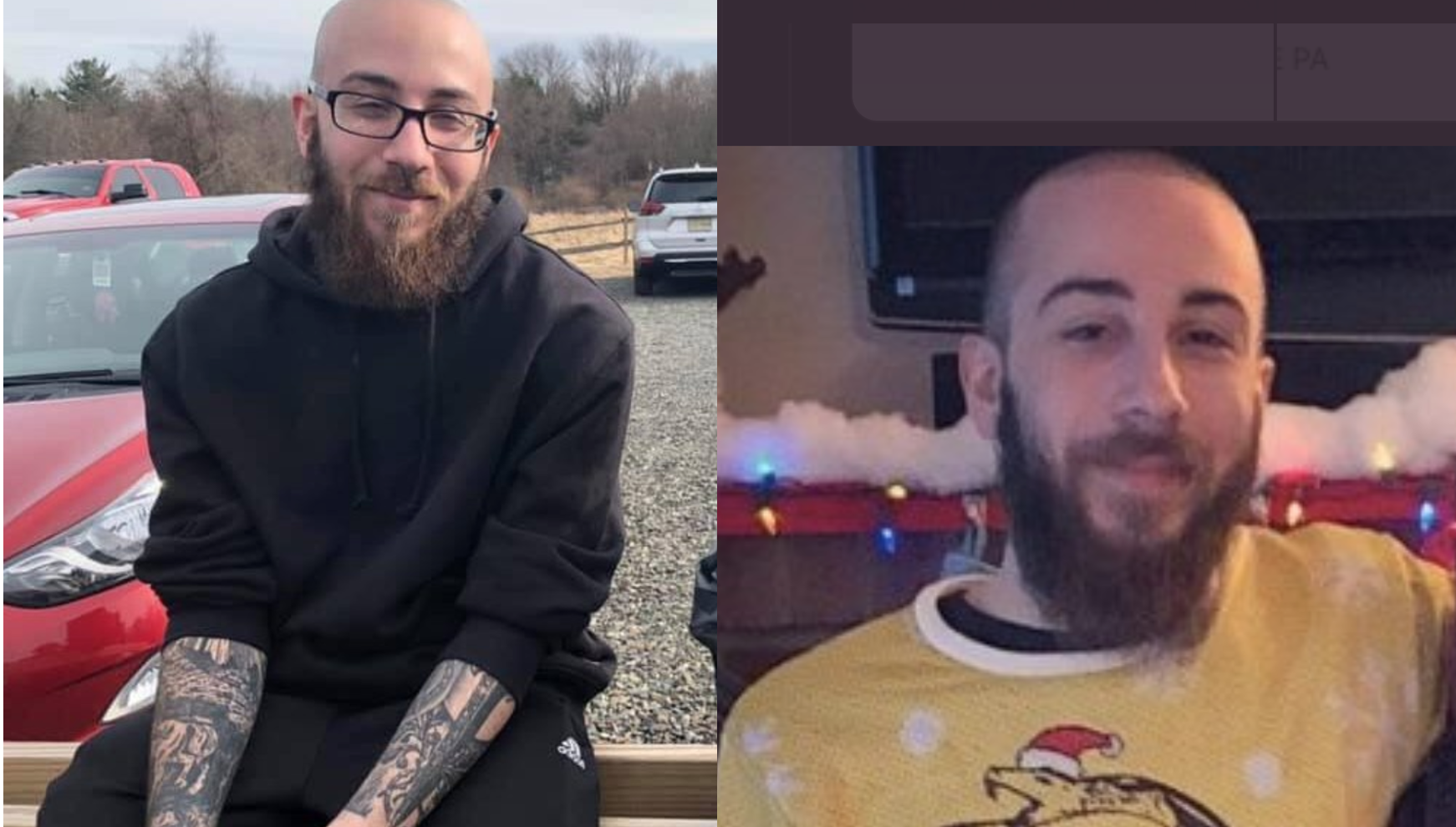 We have identified this individual as Zachary Ross Stern of Bushkill, Pennsylvania who used the alias “Ryan-PA” in the Unicorn Riot leaks of the neo-Nazi organization, Patriot Front’s, chat server. Stern’s story, however, has an strange twist.

Zachary Stern came to our attention when he was mentioned in an article about Patriot Front in the Huffington Post, “Inside Patriot Front: The Masked White Supremacists On A Nationwide Hate Crime Spree.” Chris Mathias and Ali Winston wrote:

Videos showing Patriot Front’s retreat included footage of a rental number on the side of one of the trucks. HuffPost has obtained a copy of that truck’s corresponding rental agreement on July 3. It shows that it was rented by a man named Zachary Stern, who listed an address in Bushkill, Pennsylvania, about a two-hour drive north in the Poconos, as his residence. Public records show Zachary Stern owning a house at that same address.

Looking into Stern’s background, we found some interesting parallels with a Patriot Front member who used the code-name “Ryan-PA,” and whose member number is “PF-2575.” Zachary Stern is a tattoo enthusiast and his arms are extensively covered with tattoos. However, Zachary Stern also has a distinctive tattoo on the third finger of his left hand. A detailed examination of the imagery of the individual suspected to be Stern also reveal that this individual has an identical tattoo in an identical location.

Zachary Ross Stern of Bushkill, Pennsylvania has a lengthy involvement in white nationalist circles, but what is disturbing is that this is despite having a Jewish background. Zach Stern registered a music distribution company called Vanguard Productions out of his parent’s Piscataway, New Jersey home. This company catered to Nazis and White Nationalists. He quickly earned himself a “Hate Group” designation from the SPLC. Vanguard Productions distributed Nazi music, books, & merch: Self describing thusly: “VANGUARD PRODUCTIONS is not a commercial label and thus remains unapologetic for the right wing/fascist views expressed on many of its releases. Herd/weak mentalities will find no welcome here”

Let’s give a big warm welcome to Patriot Front member Devin Alexander Heming of Altoona, Pennsylvania AKA “Alexander PA”! Devin is likely responsible for the white supremacist vandalism of a memorial at MLK Plaza in State College, Pa. Fuck you Devin and welcome to the spotlight! 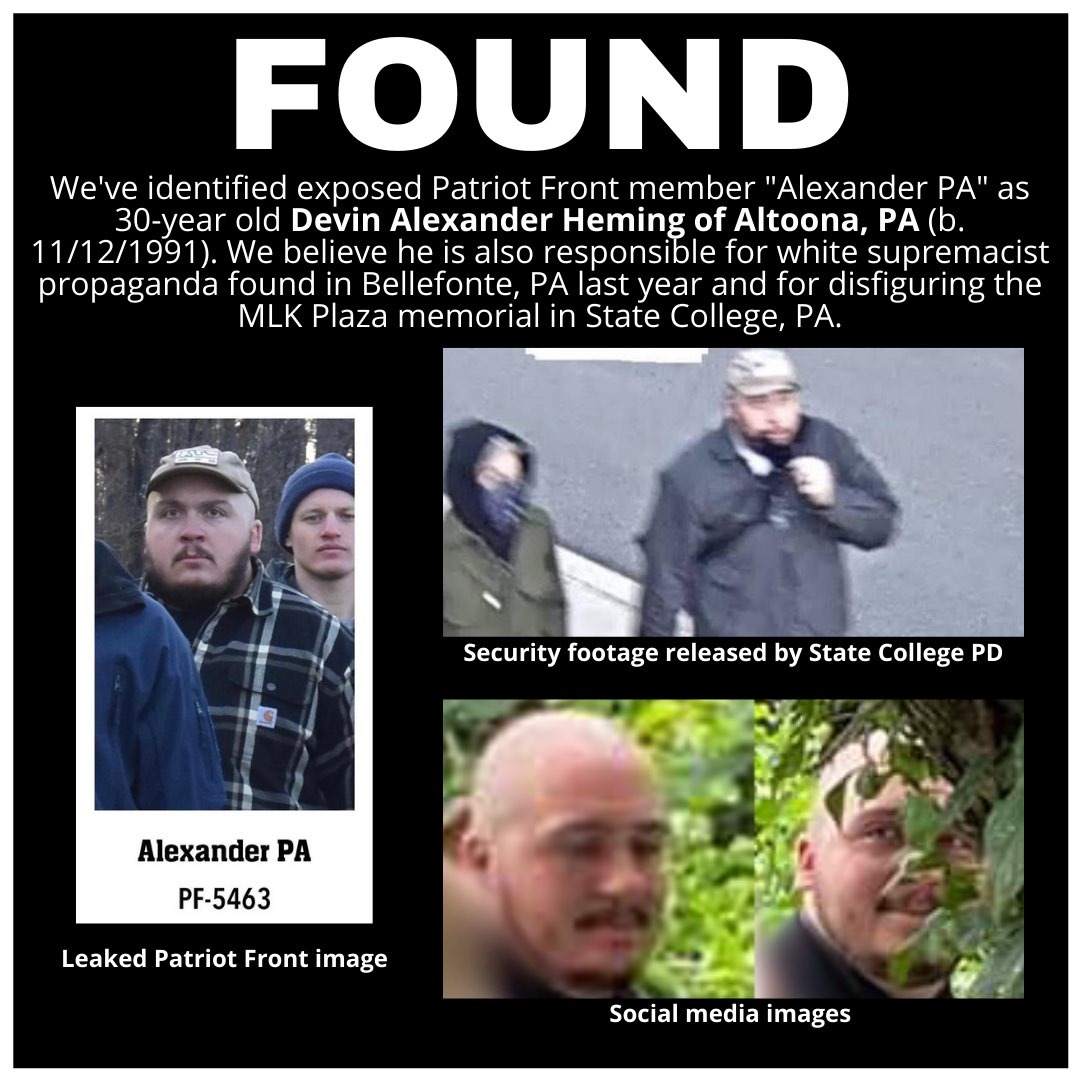 Anti-Fascists unaffiliated with Philly Antifa have identified one member, known in Patriot Front chats as Alan-PA, as Dustin Sargent, owner of Sargent and Sons Masonry in Kunkletown, PA. We have independently confirmed the information sent to us through the above mentioned data leak and social media posts by Sargent.